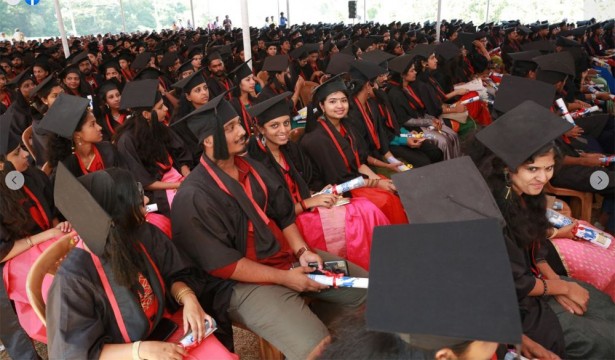 It was 'Ode to the West Wind'  by Shelley and Professor Krishnan was passionately explaining  the fragmentation and regimentation of life quoting the last line of a stanza: "I fall upon the thorns of life, I bleed".

Son of veteran Shakespearean Prof TR Subramonia Iyer, S Krishnan was my favourite teacher of  English Romantic  poetry.  His sister Lalitha was also in the graduate class of English Language and Literature in 1962 in Kottayam's CMS College.

As an example of regimentation, Krishnan pointed his fingers at the parading NCC cadets under the shades of the casuarina trees and said savagely " Look at them, so servile, Left right, left right". His idea went home easily.

When speaking of Shelley and Keats, Krishnan could easily recall similar lines from Edapally and Changampuzha with a preamble that great writers thought alike implying the Malayalam poets never had any compunction in imitating great English versifiers.

Krishnan's story never ends there. A few years later I saw him hurrying to the college in full military uniform with a red belt gleaming around his port belly. I was shocked to learn that he had become a lieutenant in the NCC for the paltry allowance of ₹ 150 but with the status of  a gazetted officer.

A few  months later I met him again. I asked him bluntly how he could do so after berating the NCC as living example of servitude and regimentation. His bemused answer came in a classic shot in Malayalam: "Ettilappadi, Payattlippadi."(“Bookish knowledge has nothing to do with biting realities of life.")

India's first college of the British colonial days, the 'Cotym Syrian College of CMS', was founded during the rule of Col. John Munro, Resident and Dewan under Her Highness Lakshmi Bai, the Maharani of Travancore. Benjamin Bailey, well known as the first Malayalam lexicographer, was the first principal. Richard Collins and his wife Frances Ann Wright arrived later to serve as Principal and teacher respectively. Girls were admitted only in 1913.

CMS College celebrated it's bicentenary in 2017 with the President of India Pranab Kumar Mukherjee honouring it as the chief guest. Archbishop of Canterbury Justin Welby was the guest of honour for the valedictory.

An train of English missionaries joined college as teachers and I was fortunate to have Prof Arthur Bagshaw MA Oxon, the last English man in the College, teach me in my MA class.

Prof Bagshaw had just introduced us to TS Eliot's The Waste Land on January 4, 1965 when at noon during the lunch hour I heard over All India Radio that the poet had just passed away. I rushed to the class to share the sad news with my classmates.

There were only a handful of girls in the class. “TS Eliot is dead,” I told them. There was a pin-drop silence for a while. At last one of the girls asked "Who?" Prof Bagshaw spent the next three periods to deal with the life and times of Eliot, whom he called the greatest modernist of English poetry.

In the very same class room we listened to a host of English teachers like Joan Eliot, P. Brooksmith, KR Achuthan Nair, K Samuel, Ann Thomas, Rachel Thomas, Ninan Koshy and his elder brother GK or George Koshy. Ninan Koshy rose to become the Executive Secretary of the World Council of Churches in Geneva and played host to us when we visited Europe in 1985.

A product of Madras Christian College and Nottingham University, George Koshy bewitched us with his English pronunciation that was as good as if not better than that of the native English speakers. He taught us Modern English prose and retired as professor and head of English department and vice principal.  Principal. As Synod General Secretary of the Church of South India for 8 years, he travelled widely.

Turning 90 on Tuesday, GK is a widower. His wife Dr. Molly George passed away a year ago. He still drives his own car to his old campus to lecture to the communicative English students and to occasionally enthral special audiences with his passionate semi-classical songs. Last time he sang "Balikudeerangale," the iconic song of homage to the martyres of the Freedom Movement. Of his three daughters, Gina and Meena are in San Francisco and Tina in Toronto.

Prof. K. Narayana Chandran, an alumni and son of Prof KR Achuthan Nair, is now an emeritus Prof of English at the University of Hyderabad. Chandran won a gold medal from CMS for his BA in English.  He did his PhD in IIT Mumbai. With over a dozen books pub by OUP, Routledge, etc and hundreds of research publications, he has been adjudged  as a top research scholar in Asia.

The contribution of English pioneers for the growth of Malayalam language, literature, culture and their dissemination by introducing printing is historic. Bailey brought out the first Malayalam-English and English-Malayalam dictionaries, Richard Collins the first Malayalam Grammar Book and John Peet its improved version.

Though the English pioneers did yeoman service for the growth of the native language, the college waited for 181years to introduce an undergraduate course in Malayalam in 1998 and a postgraduate course in 2013. "But the Department prevailed over the University to approve a Malayalam Research Center in the college much earlier. We have produced around 10 PhDs so far and a few are on the way,” confided Dr. Babu Cherian, who retired as HOD three years back.

Prof. Cherian is the author of 'Towards Modernity: The Story of the First College in India'. It has been translated into English by Dr. Susan John, Prof of English and published by Media House New Delhi in conjunction with the college bi-centenary. He is also the Executive Director of the Benjamin Bailey Foundation and serves as the chief editor of the UGC approved 'Malayalam Research Journal'.

Mrs Richard Collins--Frances Wright--wrote a novel entitled The Slayers Slain which was serialized in the Vidyasangraham, magazine of the college. But she died before completing it. Her husband not only completed it but brought out a Malayalam translation entitled 'Ghathaka Vadham' which is arguably the first novel in Malayalam. The Department of English has been organizing Frances Collins Memorial Lectures since 2007.

Nestling on 36 acres on  Annankunnu hills, the campus has over 50 buildings and  thousands of trees right from the casuarinas brought by the English pioneers. 1609 species have been identified and tagged under a Rewild Project.

The College is Autonomous and has earned a Heritage status. There are 3,000 students and 160 teachers. While many Universities in the West boasts of having dozens of Nobel Laureates in their faculties, CMS College is proud of having full-fledged research departments in half a dozen areas.

Prof Ei-ichi Negishi, Nobel Laureate for Chemistry in Purdue University visited the College  in 2016. "We have produced two dozens of PhDs here and a few of them have joined the college to teach," confided the Principal Dr. Varghese C Joshua.

The college has been the locale of popular films like Chamaram with Zereena Wahab in the lead and Classmates directed by Lal Jose. Kusruthikkatt, Bodyguard, CIA and Meppadiyan are some of the other films made here. "As cinema has become a passion of the new generation, it is only natural that we have set up a theatre here,” said the Principal.

However, many English purists have not taken lightly the recent conversion of classrooms 17and 17A (till recently redesignated as English Language Lab) into a modern Educational Theatre with plush 86 high tech chairs and air-conditioning at a cost of  ₹ 3 million.

A documentary on the college 'Cradle of Modernity, History of CMS College' scripted  by Dr. Varghese C Mathew and directed by alumni Joshi Mathew was the inaugural film. Prof. Joji John Panicker serves as the co-ordinator of RUSA funds that facilitated the conversion.

A number of my classmates ended up as teachers of English with a few ones like Sosamma Varkey and CA Abraham in their alma mater itself.   Elizabeth Thomas, Chechamma Abraham, Mercy Fernz, KK Baby and George Mambara followed suit in different colleges across the state and outside.  George taught in the American College, Madurai and migrated to the US to continue teaching.

Susan Jacob  living in  in Bangalore rose to represent Indian women in the Womens Concerns of the CCI—Christian Conference of Asia with headquarters in Chingmai, Thailand and WCC-World Council of Churches, Geneva.   Rose Elizabeth Kurian did her BEd, taught in Goa and ultimately joined one of the oldest schools in Kottayam, MTS HSS, where she taught my two sons.  One of the brightest, Mary Paul, joined the New Indian Express, Kochi to serve on the editorial staff.

One of my MA classmates, CA Abraham, went up the ladder further to become the 25th principal of the college in the footsteps of eminent English men like Benjamin Bailey. Abraham was the first Indian to rise from the Department of English. KC George who retired as professor of English in the college also serves as President of the Old Students Association.

The Fellowship of Retired Teachers, CMS College led by CA Abraham has gone into publishing with its debut vol GK’s Jokes. The second vol was a tribute to John O'Hind, former librarian of the college who left his marks as a writer. "Like Robert Southey, each book for him was the precious life blood of a master spirit," commented Dr. Susan John who edited the vol.