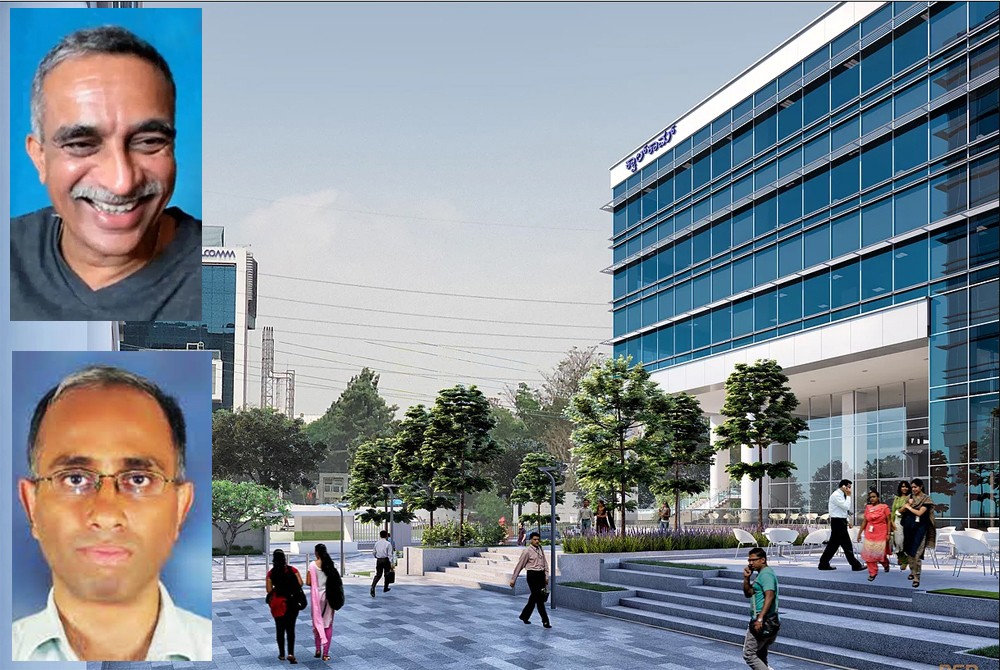 Migrants to Malabar from Travancore, more than half a century ago, they had very humble beginnings. But Abraham, second of the 11 children to Joseph Chacko of Vadasseril, left home in Angadipuram in Kozhikkode district in search of greener pastures. He had only a school final certificate with him but was hardboiled and enterprising.He joined NPCC--National Power Construction Corporation--doing large projects in Asia, West Asia and Africa that gave him a big break to work in Nepal, Bhuttan, Sikkim and his home state of Kerala for the  Idukki Hydro Electric Project.

Abraham met his future wife Ciciliamma of Ramapuram, Pala at the  Banaras Hindu University medical school where  she was working and tied the knot.  Their children Jais and Jessy grew up to command pivotal positions that couldinfluence the fortunes of 21st century India. Jais is a Director of Qualcomm India in Bangalore and Jessy a professor of the All India Institute of  Medical Sciences, Raippur, now on furlough in Washington DC, where she used work as a post doctoral fellow at the Howard University.

In DC itself, India’s Prime Minister Narendra Modi met Cristiano R Amon, President and Chief Executive of world chip leader Qualcomm who offered to help India achieve fully integrated digitalisation of the country including 5G, its mastercard.
Modi highlighted the vast opportunities India offers. Amon expressed keenness to work with India in areas such as 5G and other Digital India efforts.
"It was a great meeting. We're so proud of a partnership with India. We talked about 5G and its acceleration. We talked about an incredible opportunity to advance the industry not only domestically in India but India as export of technology," Cristiano said.
Modi assured Qualcomm that
India will proactively work on the proposals made by them. He stressed that India has the scale for ambitious projects. “India has prepared 5G standards and urged Qualcomm to actively participate as they did in case of NAVIK," he said.
Cristiano, a Brazilian, joined Qualcomm in 1995 as an engineer to develop semiconductor business. With stints in Vesper, a wireless operator in Brazil, NEC, Ericson and Velocom, he was elevated as Qualcomm CEO only in June 2021.
In India,  Qualcomm has presence in a variety of areas including education, communication, agriculture and health care. In its Whitefield, Bangalore head quarters,  Jais Abraham,Director of Design For Test methodology with eight six patents he co-authored, supervises 300 engineers to perfect error free Very Large Integrated Chips that will be shipped to its clients TMSC in Taipe and Samsung in Seoul. Both are world leaders in the semiconductor production.
Jais’s sister Jessy after graduating from Banares did her masters and PhD biochemistry in the Central Food Technology Research Institute, Mysore to go toWashington to do post doctoral at Howard where she worked on molecular mechanism or the biology of breast cancer. Then she moved to theNational Institute of Health in Bethesda, Maryland and Lombardi  Cancer Center of George Town University to return to India after 12 years to join the AIIMS.
In the traditional way, she was introduced to Lijo, a software engineer from Kodencherry in Kozhikode district whom she married to raise a family in DC.  Of the two children, Joyal is doing third semester in James Clark School of Engineeing, Maryland and  Liya with her in Raipur. Lijo is doing contract work for the government. “We are fighting Covid successfully in Chattisgarh with ample vaccination and social education,” Dr.Jessy told me before emplaning for DC for two months. They  live in Inwood Ave, Silver Spring, hardly 15 km from the White House.
The 36-year old San Diego, California-headquartered Qualcomm operating 170 offices in more than 30 countries including India, China and the United States is a leader in  semiconductors, software, and services related to wireless technology. It owns patents critical tothe 5G, 4G, CDMA2000, TD-CDMA and
WCDMA mobile communications standards.It has also developed semiconductor components or software for vehicles, watches, laptops, wi-fi, smartphones, and other devices.
Jais did his schooling in Banaras and graduation in Electronics and Electrical Engineering in IIT Chennai and joined Texas Instruments to work in Houston. Like his father, Jais was a workaholic and is a bird of passage when there was not enough work at hand. He changed to AMD, Mastalgiao, Intel, ABB and finally settledwith Qualcomm for the last four years. As Director he is heading the VLSI—Very Large Scale Integrated Chips division where he engages 300 people, 20 per cent of them women.
Qualcomm global team of approximately 41,000 employees is comprised of engineers, scientists and business strategists. They are from numerous different countries, speak different languages and provide unique perspectives. Together, they focus on a single goaland achieve mobile technology breakthroughs.
Qualcomm India is headquartered in Whitefiled where a new swanky office complex is coming up. It also three other offices in the Silicon Valley of India. It has offices in Chennai, Gurgaon, Hyderabad  (7 offices), Mumbai and Nashik. In China, the company has spaces in Beijing, Hong Kong, Shanghai (5 places) Shenzhen, (2), Xian and Wuxi. (7). Singapore and Vietnam (in Hanoi and HoChi Min City) are among its hubs in South East Asia.

Having total assets of $36 b in 2020 and an annual net income of $29 b, Qualcomm wascreated in July 1985 by seven former Linkabit employees led by Irwin Jacobs The company was named Qualcomm for "QUALity COMMunications".It started as a contract research and development center largely for government and defense projects. It merged with Omninet in 1988 and raised $3.5 million in funding in order to produce the Omnitracs satellite communications system for trucking companies.
Qualcomm grew from eight employees in 1986 to 620 employees in 1991, due to demand for Omnitracs. By 1989, it had $32 million in revenues, 50 percent of which was from an Omnitracs contract with Schneider National. Omnitracs profits helped fund Qualcomm's research and development into code-division multiple access (CDMA) technologies for cell phone networks.
CDMA networks were launched in Argentina, Brazil, Mexico, India, and Venezuela. Qualcomm entered the Russian and Latin American markets in 2005. By 2007, Qualcomm's technology was in cell phone networks in more than 105 countries. Qualcomm also formed licensing agreements with Nokia in Europe, Nortel in Canada, and with Matsushita and Mitsubishi in Japan.
The company competes with Huawei, HTC, Nokia, and Samsung in mobile phone technology and MediaTek and Samsung in the semiconductor market. In its strategic investment segment include IBM, Hewlett-Packard, Dell, Google, Broadcom, Texas Instruments, and Nokia.
Talking to me while working from home in Cascading Meadows, a gated community in TC Palaya in Old Madras Road, Bangalore, Jais Abraham, 49, told me his company could integrate with India’s needs in building a fully wired country like South Korea or Taiwan. India has withstood the challenges of the pandemic and is poised to achieve 10% growth in the production and service sector according to the latest forecast by the IMF.
Jais met his wife Duicy while they were working together in ABB—Asea Brown Boveri Ltd, in Bangalore.  His 80 year old mother Ciciliamma lives with them while Duicy’s 87-year old widower father John lives in his own nest in the same compound. “We love to take care,” Duicy told me. She quit ABB to raise a family and work as a free family counsellor with Urban India Missionaries with Dr. PC Thomas at the helm. Jais-Duicy have three children—Anne, Nathan and Daniel.