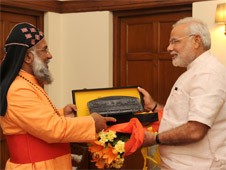 Thiruvananthapuram, August 29, 2014: A leader of India’s main communist party on Friday accused the head of the bishops’ conference of supporting Prime Minister Narendra Modi and his Hindu nationalist agenda.

The cardinal also said a day after their talks that “there was no situation so far not to trust the prime minister” since he took office in May.

“His remarks certainly weaken the attempts of secular forces in their fight against Modi’s action plan,” Vijayan wrote.

He cited a series of recent statements by members of the right-wing Hindu group Rahstriya Swayamsevak Sangh (RSS) and events including an attack on Christians by Hindu fanatics when Modi was chief minister of Gujarat state.

The cardinal should “open his eyes to see the gravity of the situation India is passing through,” Vijayan added.

Although Modi has refrained from making public statements which endorse the right-wing Hindu agenda of his support base, critics warn that hardline elements in his party and Hindu groups including the RSS have been emboldened by his sweeping election victory in May.

Reports this week claim that Hindus in Uttar Pradesh reconverted 72 Christians back to Hinduism although it remains unclear whether they were coerced. Vijyan warned Indian Christians that they could expect further conversions under Modi.

“With whom will the cardinal show sympathy?” Vijayan said in a telephone interview on Friday.

Cardinal Cleemis was not available for comment. However, his Auxiliary Bishop Samuel Mar Irenios said criticism by the Communist Party failed to consider all that happened in the meeting.

“The cardinal submitted a memorandum to the prime minister, which had listed several subjects of Christians’ concerns. The threats to India’s securalism was one of the major concerns,” he said.