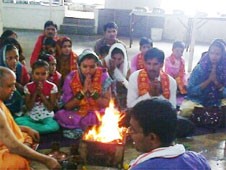 Uttar Pradesh, October 28, 2014: It is the third incident in less than two months in the northern Indian state. Brahmins (priests), and Hindu radicals have “sacrificed” Bibles to their gods and given sacred books to the Christians to validate the ceremony. Christian leader: “alarming trend”.

In the district of Jaunpur (Uttar Pradesh) 310 Christians were “reconverted” to Hinduism, according to reports from the Global Council of Indian Christians (GCIC). Speaking to AsiaNews they say it is an “alarming trend, that must be stopped as soon as possible”. The episode occurred on October 26, this “return home” – as the Hindu radicals who organize these conversions term it – is the third case in less than two months, and always in Uttar Pradesh.

The converted belong to 30 different families: the last four years, various members have embraced Christianity of their own free will, renouncing Hinduism. According to local police officer Thanakshetr Tutipur, at the time conversions had created a stir among the Hindu organizations.

Taking advantage of the festival of Diwali – one of the most important in Hinduism – Hindu local leaders, along with radical militants, organized the conversion ceremony at a temple of Radha Krishna. To mark the complete “return home”, the Brahmins (Hindu priests) “sacrificed” Bibles and given to each person a copy of the Bhagavad Gita (holy book of Hinduism) and the Hanuman Chalisa (prayer of the god Hanuman).

“Freedom of religion – Sajan George, president of the GCIC told AsiaNews – is our constitutional right. The underhanded methods used to reconvert innocent Christians to Hinduism are dangerous. The GCIC is concerned about the insecurity experienced by vulnerable Christian families. In Uttar Pradesh Hindu radicals using veiled threats to intimidate minority communities”. 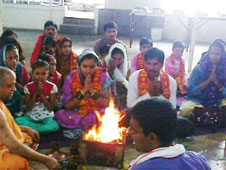