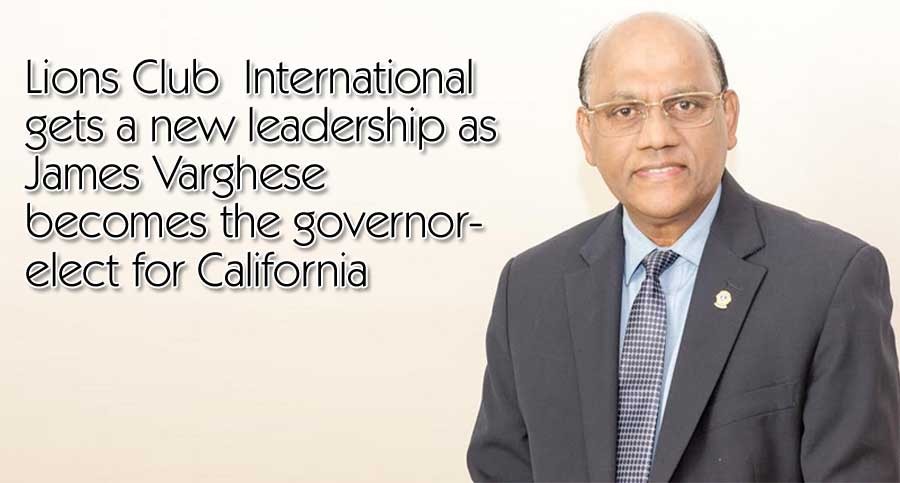 The first Vice District Governor of California, James Varghese has been elected as governor for the district. A person with an extensive history of helping people in need, James Varghese aims to conceive even newer projects in his term. As a devoted people’s person, Lion James will lead 42 Lions Clubs in California. He will be assisted by a cabinet of 20 officers, first vice district governor, second vice district governor and 50 different committee chairs to help as many people as they can. His office term is to start on July 1st, 2021.

California, USA - On a mission to create a positive impact on the world, Lions Club is the largest service club in the world. With a century-long heritage, Lions Club promotes the well-being of people all over the world. This positive impact can only be achieved with great leadership. One such leader is James Varghese, who has recently been elected as the Governor for the term of 2021-2022. Starting his office duties from July 1st, 2020, Lion James has the vision to continue the decades-old legacy of Lions Club. He will be sworn in as part of the Virtual International Convention being held in Montreal, Canada.

The newly elected district cabinet under the guidance of James Varghese is planning to have a District Cabinet Installation ceremony. Following this ceremony, the entire cabinet will be officially installed.Governor James and his cabinet will take the oath in front of the honorable guests. The chief guest for this ceremony is the Past President of Lions Club International, Joe Preston. This commemoration will act as the building block of the endeavors that Lion James intends within his term.

James Varghese is a man with a broad vision. He sees the world and aims to beautify it. While Lion James served as the Vice District Governor, he overlooked many key aspects of serving his community. His notable titles include Charter President of Silicon Valley Indian Lions Club, Zone Chair and Region Chair. Lion James believes that when someone has power and authority, they must consider it their duty to help as many people as they can.

The world is facing appalling times right now. With the spreading of the pandemic, millions of people globally are being affected in one way or another. This pandemic has jeopardized health as well as the financial well-being of people all across the world. As a member of Lions Club, James Varghese has dedicated his power and title to help those in dire need. Partnering up with third party organizations, Lion James has provided hundreds of tons of food. This free food has proven to be of much help to low-income earners. In addition to providing free food, Lion James also helped school-going children by providing them with free backpacks and other necessary academic items. For those who lost their jobs, Lion James arranged special amenities so that they can make their ends meet. Moreover, he also generously helped food banks.

Taking the office as the Governor, Lion James has big plans that he desires to implement in his term. James Varghese says: “I am working with partner organizations like Eva S. Rosa Trust, Silicon Valley Indian Lions Clubs, etc. and planning to distribute thousands of backpacks and school supplies to the low-income students of Alameda and Contra Costa Counties and also working on providing internet Wi-Fi equipment to enhance student’s education experience at many low-income families.” Providing students with necessary school items will be beneficial when the schools reopen for in-person classes. Lion James is a staunch believer in providing quality education to all. He helps in any way he can to improve the education and schooling system within his reach.

James Varghese is a proud member and Melvins Jones Fellow of Lions Clubs International. Since its inception in 1917, this Lions clubs International has aided communities across the globe. Lions Club now spans across more than 200 countries with millions of members encompassing more than 48000 clubs. The mission of Lions Club is: “To empower volunteers to serve their communities, meet humanitarian needs, encourage peace and promote international understanding through Lions clubs.” Rooting from Lions Club is a charitable arm, Lions Club International Foundation. Founded in 1968, this foundation has provided free meals, vision screenings, diabetes screenings, advocacy for pediatric cancer and education to millions of people.