"We are on the threshold of a mighty revolution…it is a revolution that will bring democracy to the doorsteps of crores of Indians", Rajiv Gandhi once said. To empower India's people, especially the long-neglected masses in the rural villages, Rajiv Gandhi championed the cause of Panchayati Raj. It is one of the many reforms that would radically change the nation's course for years to come, and it is only appropriate that we are again reminded of the legacy and sacrifice on his 76th birth anniversary.

Rajiv Gandhi was the youngest Prime Minister when he took the oath of office at the age of 40 after the assassination of Mrs. Indira Gandhi. He is known more for his innovative ideas regarding India's future in Information Technology and how it should lead the world in the 21st century. His policies to create a new department of Telecommunications together with his readiness to bring in a young and capable NRI, Sam Pitroda, from the U.S. to help in that endeavor changed the face of India as an IT superpower that brings home about 150 Billion dollars in annual foreign exchange earnings from technology services.

If we look back in history, the Indian economy has been primarily based on agriculture. In the 1990s, nearly 70% of India's workforce was engaged in farming, although agriculture accounted for only 33% of India's Gross national product. Though most of the people lived in the rural villages, the bureaucracy and the political class enunciated policies and plans favoring the urban dwellers and their surroundings. In his visionary mindset, Rajiv Gandhi saw an excellent opportunity to orchestrate substantive change in transferring the power over to the people.

The Panchayati Raj concept has been around for some time. However, it was mostly confined to the bureaucratic circles. But the idea started to blossom when Rajiv Gandhi introduced the "Responsive Administration' concept as part of a 20-point program. Together with Mani Shankar Aiyar, joint Secretary at the PMO, Mr. Vinod Pandey coordinated producing the report with input from various ministries and state governments. It should also be noted that Rajiv Gandhi had held numerous meetings, especially with  District Magistrates, to lobby and convince the skeptics among them to join him in proclaiming Panchayati Raj institutions as the third tier of the government after the Center and the States."

The state of Karnataka was a trailblazer in the issue of reservation for women and allocated 25% of all seats to women in as early as 1984. However, the proposed amendment provided 30 percent of reservation for women and proportional representation for scheduled castes and scheduled tribes. Although many in the opposition found this idea further to dilute their power or encroach to their territory, they could not find a rationale to oppose these reform plans.  Although the Constitution (Sixty-fourth Amendment) Bill got a two-thirds majority in the Lok Sabha, in the Rajya Sabha on 15 October 1989, it failed to meet the mandatory requirement by two votes. However, in September 1991, the Congress government under Narasimha Rao introduced the 72nd (Panchayats) and 73rd (Nagarpalikas) constitutional amendment bills, and these amendments to the Constitution brought about a fundamental change not only in the realm of local self-government but also in India's federal character.

Dr. George Mathew, Chairman of the Institute of Social Sciences, in New Delhi, who has made a substantial contribution in the last several decades promoting the idea of Panchayati Raj into an action plan is quoted as saying "the pioneering efforts made by Prime Minister Rajiv Gandhi was his strategic foresight and pivotal imprimatur within the larger ambit of India's policymaking apparatus that sowed the seeds for the progressive realization of Mahatma Gandhi's vision for Gram swaraj. Thus the 64th constitutional amendment Bill introduced in Parliament by Rajiv Gandhi on 15 May 1989 was historic".

One of the most positive results of the 73rd Constitutional Amendment has been women's participation in a big way in the democratic institutions at the district, block, and village levels with lakhs of women performing leadership roles. Mr. Gandhi's concern of lack of representation by women in elected offices was well reflected in his phenomenal speech to the Parliament. He said, "it is the women of India, in their role as grandmothers and mothers, who have been the repository of India's ancient culture and traditions. It is to them that is entrusted the responsibility of transmitting to the next generation the quintessential values, standards, and ideals which have enabled our civilization to survive and flourish without a break despite vicissitudes of many kinds. It is the strength of moral character which women will bring to the Panchayats. Let us give them a warm welcome".

Today, out of 32 lakhs, electoral representatives 14 lakhs are women who are making important decisions at the Panchayat or Nagarpalikas level dealing in areas of education, economic activities, healthcare, legal literacy, and advancement of women. The realization of the Panchayati Raj was not only a masterstroke that shined the light on the millions of rural Indian citizens who lived out of sight of the ruling elites but also showed the world a man of great heart and courage with empathy and visionary ideals that brought about a revolution to the doorsteps of every Indian. Thank you, Rajiv Ji.

(writer is a former Chief Technology Officer of the United Nations and the Vice-Chairman of the Indian Overseas Congress, USA) 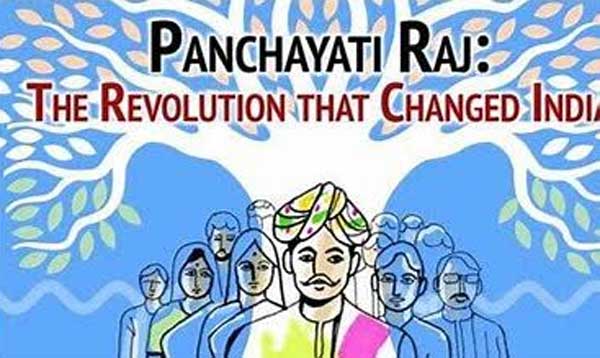