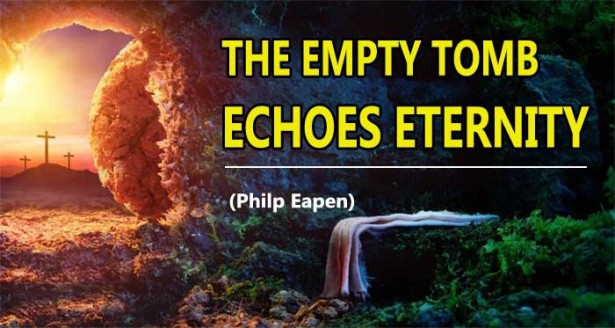 The God we serve is an awesome God,

There is none like Him in heaven or on earth.

Leaving His glory in heaven, came He down with a mission,

A mission to do His Father’s will through a magnificent Salvation plan.

Took He human form and lived among us.

Traveled He from city to city, town to town and village to village,

Feeding the hungry and raising the dead.

Task He finished assigned to Him by His Father;

“It is finished”, uttered He on the Cross.

He took it on himself the punishment for our sins,

And died He on the Cross becoming a “propitiation”.

They buried Him in a borrowed Tomb and secured the Tomb with stone.

On the Third Day, came He out of the Tomb as promised.

The earthly grave cannot hold down the body of the Son of God.

The Tomb was open and the stone got rolled away.

He has risen from the dead and He reigns.

Victory He has won over Death and Satan once and for ever.

The message of the Empty Tomb remains the same: