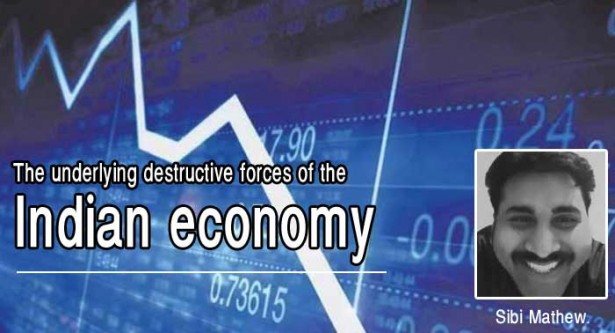 The national intelligence agency predicted that the Indian economy is in a very challenging position and facing an immediate collapse. While India's GDP remains pretty constant at nearly 3.5 trillion dollars, the overall population bearing the brunt of a sluggish and crippled economy. The 2020 per capita income was about 500 dollars, and it is expected to have a deep steep in the next couple of years. The modi government apparently lauding and taking unreasonable credit for the current economic status while the opposition being treated as effigies. The question which must be asked is that "where are we headed?" The truth of the reality is that unless reinforcements are provided to boot it in the near term, the economy will continue to be on trajectory for perdition. In this analysis, Sibi Mathew would like to provide five scenarios that could potentially endanger the Indian economy. My understanding is based on massive research, intuition,and performance metrics.
1.increasingly declining India's military strength.
Since the Independence of India in 1947, the territory has been on the lookout for creating and periodically strengthening by investing in technology,equipment, and manpower. After being fought with India's born rival Pak many timesi the past several decades, the country is dispirited and completely hopeless given the fact that the enemy remains a military and economic treats. The inadequate defense spending create a high burden on analysis of military strength. And most certainly, India is underperforming in its military responsibilities compared to its neighbours. If Indian military is continue to be strained and confront wear an tear, the economy will not be bolstered by the current and emerging threats from Pakistan and China.
2.the ongoing farmers' revolt.
The agricultural sector takes up about 30 percent of the India's GDP.Therefore, the survival of the industry is definitely an imperative aspect to consider when speaking about the economy. The government's inaction to satisfy the interest of the farmers to raise base pay for most agricultural goods is really aiding fuel for the continuity of the strike. If the farmers are continued to be ignored, vast majority of the farmland will remain uncultivated and deserted. Currently, no guarantee is given to the farmers who toil in scorching sun to redeem their hard work. The most promised irrigation projects, suicidal deterrence,pesticidal assistance, and property tax- exceptions are not being implemented by the central government. Farmers are,without question facing an unprecedented challenge in this respect. Financial assistance for genetically engineered seed species and other cultivation process, farming equipments are among the things that are not being remedied.
3.unsatisfactory and complacent foreign trade deals.

While the government struggles to reduce trade deficit, the total export continue to take a destructive toll on the general population. The manufacturing sector is proven to be facing bottle-neck scenarios in the production line and an ineffective workforce that slows down the overall process. The central bank's unethical standard for interest rate is staining the companies from debt financing and equity financing. Most businesses are seeing a reduced market share and the customer base is being reduced constantly. Foreign countries are petrified outsource their businesses to India due the high tax burden,secterian violences,employee strike, and wage demand. China has a comparative advantage against India because of the Chinese import ever increasing. The unviable trade policies are fueling the Chinese govt. To dump their products into various markets. The second largest textile industry is utilizing it's most advantageous position to outrun the Indian textile industry's profit-taking strategies. The bottom line is Chinese products are cheaper and more good in quality.
4.the tech industry is on the decline.
The teck-boom bubble that the India has seen is burst into flames. The active job seekers are facing tremendous competition as the ratio between the employment availability and unemployed is widening. The new graduates in the field is facing a massive disappointed as they cannot find desired employment. Most tech companies are at the brink of reducing workforce and equipment acquisition to sustain operating costs burdens. Projects spearheaded by functional groups are confronted with inadequate resources, and manpower. Corporations and mid-size businesses are being held back from mergers and acquisitions to cut back costs and expansion. If this trend continues, bankruptcy will be the only available options for most tech companies.

5. The rampant political corruption across the country.

The most debilitating effect to the economy is the corrupted politicians having selfish ambitions and rapacious behavios. As many of them facing political bankruptcy, peopl feel a trust deficit. Outdated economic policies, lack of innovative thinking, prevalence of Neanderthal thinking, ineffective think tanks,technological growth decline, all are attributed to the analysis of the upcoming very-possible recession mode of the Indian economy. The sky-rocketing national debts and state debts are also a contributing factor which could be factored into this positive recession analysis. Always, the most affected population is at the lower level of the economic ladder. You as a politician is confronted with these conspicuous challenges as you aim to provide effective leadership. Economy is the backbone of any nation's strength and well-being. Therefore, coming up with a framework to address these most important issues must be on top of the agenda. You must unshackle the chain of political corruptions which you may have been a part of, and come out from the shadows of the comfort zones to face the general public and of course, to emancipate them from the dander they are in. Let us win.
--------
Sibi Mathew, who moved to the in 1993 from Konni, is an actor, and his videos are available on YouTube: "sibi Mathew ." He ran a radio show for a couple of years from 2016 to addition to hisy participation in the 2016 Republican presidential campaign.

He also served in the USAF as a commissioned officer during former president Obama's administration from 2012 to 2014. ‘Being a politician of the Republican Party for the last five years shaped and equipped me to have an auspicious political career in the ,’ he says. ‘I consider myself to be self-educated for the most part of my academic life.’
Sibi Mathew