The Moral side of Samkshiptha (abridged version)Ramayana-6- (part 4):Dr. A. Sreekumar Menon 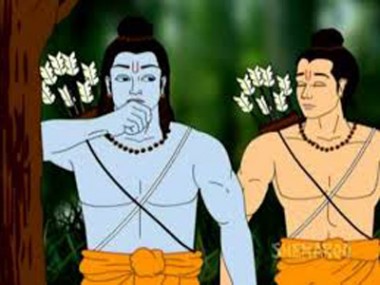 When Rama and Lakshmana returned to their hut, they found Sita was missing. They started their frantic search for sita . On their way before reaching Kiskinda, the territory of monkeys, they met Jadayu in his last stage. With Difficulty, Jadayu could convey to Rama that he found Sita  flown   by Ravana. Before he could tell the direction of Ravana’s aircraft, he died. Rama performed obsequies of Jadayu and liberated his soul. Jadayu was orinally a saint, he took subhuman form due to sins committed in his last birth.. He was redeemed of the effects of his past karma and regained his original stature.

The above episode brings out the following moral principles .Ravana well conceived the plan of Sita’s abduction and he also executed the plan with precision.  But it was for evil ends.  The capacity for planning and execution should be utilized for achieving acceptable goals .Perverted intelligence is as harmful as impulsive behavior. Intellect alone is not enough, it should be tempered by   right conduct which sets right direction for the intellectual capabilities to operate and bring out desirable fruits of action. Modern Scientific discoveries are the result of human intellect or ingenuity , but  what science should  produce should be decided by  human values or what is right from the point of view of general welfare of the people . For instance invention of new and powerful weapons of mass destruction is not   justified   or does not make any moral sense. A criminal may execute a criminal activity with meticulous planning, but it is not certainly appreciated by the society. No credit is given for his ingenuity. Ravana   is personification of perverted intelligence. The lesson we should learn is that we should use our skills and capabilities for right purpose and be assets to ourselves and the society at large.
Sita’s greed to possess unnatural deer caused the mishap. The inner meaning of this incident is that with our desire for moon, we may end up in trouble. We should not have unrealistic expectations. We should aim at what we can achieve   by stretching our capabilities to the maximum, beyond which  it turns into   wild dream  .We have seen gamblers  offering high stakes  and incur heavy lose , as Yudhistira, the eldest of the Pandavas did .  Pandavas lost everything including their kingdom. Yudhistira ultimately lost his wife too in the game and all of them had to spend 14 years in exile .In the modern financial arena, the possibility for gambling and disastrous consequences are beyond imagination. The greed in us makes us  spur us to become rich overnight by hook or crook , vie with each other in unhealthy competition making us   stressed  and  fearful of being caught  by the arms of law . The tendency for corruption in public life, which we find today as phenomenal is due to this tendency .It eats up the vitality of the nation. We should practice moderation and austerity in our lives .Our aim should be to put in our best efforts, earn whatever maximum we can earn   through honest means , refrain from extravagant spending , save part of the earnings of which part  to be diverted to  charitable purpose or return to the society  , without the support of which   generating wealth would be impossible We should check our temptation to chase glamorous things. The real source of perennial satisfaction and comfort is within ourselves. We achieve this when we live for some higher purposes than leading a biological or vegetative life or life at sub-human level.

Lakshmana was in the midst of conflict between multiple sentiments. He wanted to honor Rama’s word to stay in the hut and guard Sita. His affecton towards Sita, his brother’s wife which he considered as his own mother made him unable to bear pain of separation from Rama experienced by sita. He could not meet both the requirements simultaneously. Though he  had faith in Rama’s strength and nothing untoward would happen to him   , he left Sita in  search of Rama  to appease Sita .It proved to be a dangerous move .In our day to day life we  face such dilemma  and we should solve it in such a way that  the outcome is favourable .Mental flexibility and strong character are necessary  to act wisely in such problematic situations .It is necessary to develop insight into what goes on in our minds, the characteristics of which is called ‘self-awareness or self-understanding ‘ .Our discriminative intellect should  direct  our part of the mind with fleeting  and irrational emotions and impulses . Jadayu sacrificed his life to protect his friend’s people and also to honor his word that he would be their savor. It is an example of true friendship.  It is said that a friend in need is a friend in deed.  .How many of us are willing to extend help, even if it would not cause much inconvenience to us? Jadayu is an animal or sub-human. If a creature can display such shinning character, can we, proud of being king and crown  of all creations, shy away from such act ?

Rama and Lakshmana, in search of Sita reached mountainous region   inhabited by monkeys who was ruled by king Sugreeva, the son of sun God.  Hanuman, Vayuputra or the son of Vayu and Anjana {so called Anjaneya} who is one of the central characters in the story of Ramaya was his commander-in-chief. At the time, Rama met Sugreeva, he was desperate as he was thrown out of his kingdom by his elder brother called Vali and also had taken his wife Tara by force. Vali had attained immeasurable strength by doing pence on Siva. He was autocratic and ruthless. Sugreeva was soft spoken and amiable. Vali’s where abouts were not known, he was suspected to have met with death, when he fought with a demon called Mayavi who threntened him. Though Sugreeva searched him everywhere , no trace of him was found. With the request of the couturiers and the people, he assumed the office of king and ruled wisely and made everybody happy. After a while Vali return as if from nowhere. He mistook his brother as against him plotting to overthrow him and occupy throne. Though Sugreeva tried to explain the situation, Vali having no patience to hear him. He tortured him, and made him as his slave and he also appropriated his wife Tara.  Sugreeva had the good will of the army and the people.  Here the moral that comes out is that we might take to wrong action, if we are inpatient and if we allow our emotion to overrule our acts than our intellect. Sudden outburst of temper is disruptive.  we should cultivate skill to listen  patiently , without letting the temper to lose , due to our preconceived notions or personal prejudices or being hamstrung as a result of   modern stressful life . Calmness , composure , serenity , Patience , forbearance , broadmindedness , openness, endurance  even against odds ,tolerance, accommodation , forgiveness,   etc are qualities worth practicing in our modern  day life . Rama told Vali that though he was a monkey in physical form, he had a greater soul as he was awareness of divinity. Living beings at sub-human level are not endowed such ability.   What the word spoken by Rama means is that we should not judge any one by his physical form or appearance, but by his innate and intrinsic qualities. Hanuman was a monkey, but he was God. It is said that a person is not born as Brahmin or a lower caste by birth but by the habits they cultivate.  Thus everyone has scope to move in the realm of spirituality or divinity by his efforts towards virtuous living. A person born in Brahmin family and follows all the rites mechanically performed becomes a non-Brahmin, unless he follows moral codes of conduct in his day to day life.  A person is born twice. First as child who is perfectly innocent   with no evil thoughts, no sense of morality or immorality. As one grows he acquires both noble and evil qualities. A diwija or Brahmin is one who is born second time as store house of human virtues. So ‘Brahmin ‘is the title that is conferred upon him in recognition of his virtuous living which tends to be role model for others to follow. 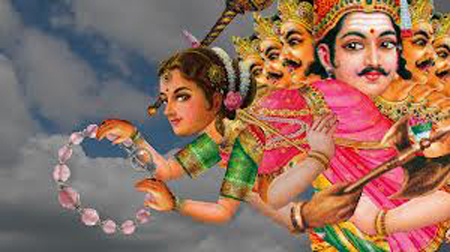