The Moral side of Samkshiptha (abridged version)Ramayana-6- (part 5):Dr. A. Sreekumar Menon 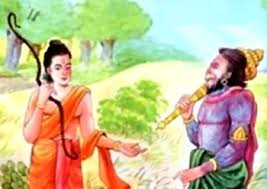 Sugreeva agreed to Rama that he would mobilize the army of monkeys to fight against Ravana and restore Sita, if he in return helped him to end ruthless rule of Vali, to which Rama agreed. Rama reasoned with Vali that Sugreeva was his well wisher that he was prepared to accept him back as king and that it was due to his mistaken notion that he attacked him. He also told him that it was not decent behavior to keep with him Sugreeva’s wife forcefully. All those advice fell on the deaf ears of Vali. He told that among monkeys, promiscuity was the rule that there was no such thing as marriage as there is in the human society and that there    was nothing wrong in it . He also told that when Sugreeva left helpless. He was protecting a lady.  Vali knows fully the divine nature of Rama and that he was embodiment of all human virtues. Lord Rama reminded him that he was not a mere monkey but higher soul as he understands abbot the divinity.

Ravana who received power from Lord Siva used his power to torment the same person who gave him the power. That is turning against the same person from whom help is received.  This is the worst among the violations of moral conduct .This is the characteristic feature of Demons .Some of us also do the same thing. Instead  of returning the help received from a person , we might try to  harm him This is  the most abhorrent quality .The sterling quality is  to do good even to those who   harm  us , not even entertaining  any ill - will towards our adversaries .Lord Rama practiced it . He never entertained ill- will towards his step mother Kakeyi who sent him to forest maliciously .After Dasaratha’s death , when h e returned to earth to meet his son Rama , after he successfully completed  excile , as advised by Siva , when Dasaratha asked him to express his wish which he would grant him , he told that his only wish which his father should fulfill was to remove the ill- will he entertained against Kaikeyi  for using his promise in a malicious way.Dasaratha acceded to his request. Rama did not develop any prejudice against Ravana. He was against his monstrous behaviors.  Even at the time of battle when Rama found Ravana’s side was weakening, he gave him last chance to give up his ruthlessness and to go for compromise .But Ravana was adamant which lead to his destruction.

Ravana   feeling his might, tried to lift Mount Kailas   where Lord Siva was in penance .Nandi, the dwarapalaka meaning gate keepr of Siva cursed him that his end would come through monkeys.  . What is meant is that the death of Ravana who  is powerful in all three worlds would be in the hands of inconspicuous creatures like monkeys .It is said even if one were to die , it should be in the hands of men of valor and nobility, so that his soul would reach heaven . So that was the most drastic punishment handed over. It is said that as per the curse to end Ravana, Gods assumed the form of monkeys. In Ramayana we find  those other than  human beings like monkeys , squirrel , Eagle  Jadayu and his brother Sam path ,  bear Jambavan,  and other subhuman forms, who were actually Gods  ,but were born  in their present form  with certain purposes to fulfill  or to come to the rescue of virtuous people . They all helped Rama in his mission of eradicating Demons from the earth and heaven .Another import is that divinity is present in every being . In Hinduism we do worship animals, birds and so on. But we do it more as a ritual or meaningless practice without knowing the meaning behind those.  . For example, the right habitat for monkeys is in the forests, being wild animals. But we find them in temple premises particularly in the premises of Rama temples. People do not harm them, on the other hand even feed them, with the result they tend to be nuisance to the people who visit the temple. As they are cared there, they breed and multiply. This act of caring them and giving them chance to multiple  is a case  of supertious belief that monkeys are descendants of Hanuman .We place our regards wrongly .what we should  practice is that we should not  hurt any living beings and live in harmony with  them and the nature .
Ravana had incurred the wrath of Vedavathi, a sanyasini or brahmacharini or a saint who was incarnation of Goddess Parvathi. Ravana, infatuated by her charm tried to take her in his arms by force. Before she jumped into the fire uttered to Ravana that she would be born as Sita in her next birth and that she would be the cause for  lose of his kingdom  and  for his death  . This shows that we reap what we sow .Good deeds come back to us as god deeds and evil ones similarly rebound to us as evil deeds and we can have no escape  from it .

Sugreeva challenged Vali for a dwell. Vali’s wife cautioned him from going for fight. She told him that Sugreeva had the backing of most powerful man by name Rama. But Vali replied to her that he knew about Rama’s power and his noble nature, that he would not intervene in a family dispute and that he was capable of facing any challenges .He raised a moral argument. He was also arrogant because of sense of power which other wise is called self-aggrandizement. Vali paid for his arrogance with his life. There is also another interpretation of the incident. Death from   by Rama’s arrow is not as we generally understand,  , but it was  gaining liberation of the soul from the fetters of the body and going to heaven .

Sugreeva and his elder  brother Vali were engaged in fierce fighting , in which at one point  Sugreeva was almost incapacitated and was going to be defeated . Rama was said as unable to shoot arrow against Vali, as both looked similar. On Rama’s advice, Sugreeva put on him a garland made from locally available wild flowers by which Rama could identify. At the nick of the moment Rama hid behind a bush shot an arrow at Vali which pierced through his heart, killing him.

Rama did not face Vali directly. Readers get uncomfortable feeling why Rama did not challenge him face to face and whether Rama’s act was not an act of cowardice. There is another interpretation. If Rama face Vali , Vali would have raised equally cogent arguments against Sugreeva and Rama would have been in a dilemma as to who was right .Another possible interpretation is that though it was not justified  absolutely , one can indulge in lesser evil  to wipe out larger evil ,if it is absolutely necessary to circumventing  the vexing issue. Vali had got the boon that no one can kill him by direct confrontation or almost immortality, the power of which he misused to do wrong . So it might not call for much criticism that Rama violated moral rule .Again the word killing should not be taken literarily. It was a case of annihilating the evil by divine spirit and /or Vali because of many of his other virtuous deeds became eligible for ultimate union of his self with universal soul or attaining divinity. Before Vali’s soul left his body, he realized his divine nature and that of Rama and was happy to have Sugreeva as his successor. He even advised him about the codes of conduct of a ruler.

If we take the fight between two brothers literally or as happened in that way we find that what happened was unfortunate. Between brothers, there should be love, not hatred. Here Vali turned against his brother Sugriva, because he had lost his sanity of mind because of his suspicion and lose of emotional control. We find among ourselves   , a brother quarreling with each other .Who ever acts against his bothers violating principle of justice is bound to suffer. We have cases ideal brotherhood as that between Siram and his brothers and Yudhistira and his four brothers. .Each one of them sacrifices for the other. Between Rama and Lakshmana, the question was who should be the king. Rama wanted to enthrone Bharatha, when he had to be in exile, Bharatha   did not accept that idea. Normally among ordinary mortals like us, younger brother would have grabbed the opportunity because of desire for power, fame, wealth, and position and material opulence. Not surrendering to such selfish desire is a divine quality. When such qualities are accumulated, we are able to experience God.