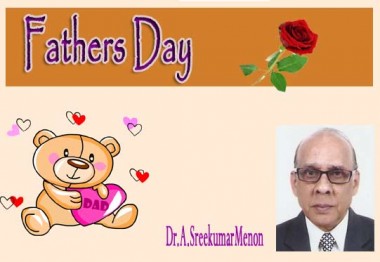 Father’s Day is celebrated these days all over the world annually . The  most obvious  purpose of celebrating the day as Father’s day  is to  pay special tribute to the sacrifices made by fathers for bringing up their children and making them stand on their own feet as capable , emotionally matured and responsible individuals  .  On that day persons how ever  older  they  may be, they take time off from their  hectic schedule , be with their fathers sharing quite moments with them and paying  tribute for all that they did for them .Feast and entertainments are also part of the celebrations . This celebration has attracted much attention in western societies than in Eastern societies including India. The reason could be that Eastern societies still maintain their traditional culture, in spite of industrialization much more strongly than western societies.  In Eastern societies, respect towards elders including parents is a valued custom and it is practiced in every day life , with the result no special time  perhaps  need be earmarked for that . Of course, the times are fast changing. Caught up in fast life, the traditional respect for elders/ parents/ fathers is fast disappearing. Hence, we find the need to earmark a particular day for remembrance of fathers.

It is pertinent to ask the rationale for observing such as Day and how to observe it in its true spirit? In the west, amidst fast life and in nuclear families, people   hardly get time to spend with their p fathers/ parents. Due to generation gap, parents also prefer to stay away from their children, because of their need for independent living. .In the west, life is governed more by outside forces than by persons’ choices and with the result, those who belong to working population keep busy always. Thus it is imperative to ear mark  particular day  when they keep themselves free to spend time with their parents .Though they  have affection and regard for their parents, they can not keep them with them and take care of them, showing their affection and regard .So at least one day in a year  is kept as special day for  renewal of the paternal relations an to show love , understanding and regard .On that day , Fathers are also given some presents  as token of their love and respect .

Fathers make personal sacrifices for their children. Whether they can afford it or not , they take care of their children’s’ needs and give them all comforts, educate them and enable them to become prosperous and develop in them  the character, with the result they become assets to themselves and  to the society at large . Parents do all these with out expecting any return monetarily or otherwise. . In other words, it is a case of pure or selfless love or love for its own sake .Even if they forgo some necessities, they will not deprive their children of their wants for luxuries. Parents are oceans of compassion. They never mistake nor revengeful against their children, even if they offend them. They would take it that it is due to their ignorance they mistreated them and not willfully .They also shows immense patience to put up with questionable behaviors of their children.  In Hindu epics, there is a saying: “Matru devo bhava, Pitr devo bhava ‘meaning, mother is Godly, father is godly. In Christianity, God is addressed as father. Sikhism advocates fatherhood of God and brotherhood of man. Our Indian tradition has given such as exalted position to parents. Similarly there are many epic stories such as Ramayana and Mahabharata showing filial love and the love and obedience of children to parents..Lord SriRama   knowing his father’s dilemma from his step mother Kikeyi and the need to fulfill his promise to her, went to the forest, even with out Dasharada telling him,, sacrificing all the regal pleasures He even told that he would have been happier, if his father himself ordered him to go on exile.. We find that the love and respect which Lord Rama and his brothers towards their father Dasharada was astonishing .Lord Parasurama instantly carried out the orders of his father and killed his mother.  Later when his father asked him to ask for a boon, Parasurama asked the boon of bringing his mother back to life. His father did it with his mystical power. Lord Ayyappn, whose shrine in Kerala called ‘Sabarimala’ where, lakhs of devotees visit every year obeyed the wish of his adopted father Rajashekharan, the price of Pandalam to go forest and bring tigress milk as remedy for the headache suffered by his queen, as prescribed by his Physician, as a plot to kill him .Here we find the importance given even to adopted father .With out debating whether such an event happened or not, let us understand its underlying moral teaching. It showcases the extreme paternal respect, obedience and veneration on the part of Lord Parasurama, one of the 10 incarnations of the supreme lord Narayanana When Ganesha and Karthikeya , the two sons of Lord Siva and Parvati  were told by their parents  that who ever came first after  going  round the world,Ganesha  went round his parents, on the conviction that it is equivalent to going round the universe and became the winner. What else is values making inroads to our life today, it is doubtful, whether the youths in our country show the same degree of caring, sharing and respecting their fathers .The treatment may range from indifference to  ill-treatment .It is not uncommon to hear committing crimes against elders for property . It shows erosion of our traditional values and men becoming worse than beasts.

Let us ask the question what is the best way of observing Father’s day?  Paying  respect towards fathers on a special day should only be a communication that they have respect towards them always .That means , even if they can not live with them , their behavior towards them should clearly show regard towards their fathers .

Fathers are mainly responsible for physical/economic support, although in these days women as mothers also contribute to the common kitty. Fathers, unlike mothers, apart from loving and nurturing their children provide them directions in life. They teach their children several life skills which help them to face the world successfully .When children respect their parents and be guided by them; they are able to develop strong character. They also develop character traits such as being modest as opposed to being pompous or egoistic like the legendary Ravana, which spell their disaster .They are able to mould their personality in a wholesome manner. So it is the children who benefit by being obeisant to fathers. Thus showing deference to elders or fathers is not a weakness, on the contrary it is a moral strength .Again fathers who lived through life carry wisdom, which can not be obtained from schools and colleges. It is the privilege children have to avail the expertise and ingenuity which elders/ fathers possess.

There is a practice of giving gifts to fathers by their children on the occasion of Father’s day. Those gifts should symbolize   children’s’ sentiments towards their fathers such as love, regard, high opinion of their experience and wisdom than a material show off. In other words, the gifts should be token of their love and regard towards their father’s .If that to happen, children should have true feelings towards their fathers. Celebrating father’s day should not be a one day affair. More than the presents/ fathers enjoy seeing their children conducting with  them  lovingly and respectfully and coming up in their lives in a wholesome way .Those are the real gifts  having permanent value which children can give to their parents.

Today in the Digital era youngersters are more mobile unlike people in the past. The horizon of their activities has widened considerably. The demands of jobs on them and the stresses and strains of living in this competitive world have robbed them of their natural spirit. Children’s staying away from their traditional homes in view of their jobs is very common today. Parents who go to stay with their children find themselves lonely and they prefer to return to their native abodes. Thus, we find a dilemma faced by elderly parents or senior citizens. What is the way out of this riddle? It is not how much time, children can spent with their parents, even if they live with them, on the other hand, it is the quality time that matters .Even if children  spent very little time in a day , if they and their spouses  treat him with respect and consideration , and if they consult them on  family matters , they would be happy  Children can share  them some responsibility  for running the house which he can handle ,instead of keeping them as baby sitters. Those actions would make them feel that they are members of the same family and that they   are looked after well. Thus they will not feeling alienation or loneliness or the sense of being aloof. If children are  away from parents, they can still  be in touch with them  through internet phone , chatting etc .These are the days when communication from any part of the world to any other  is instant . Children can be in touch with their parents  using such inexpensive modes of communication .They can consult   parent on-line on matters pertaining to running of their house holds and regard their advice and  thus give them the feeling that they are the members of one family . Similarly, children can show genuine interest in matters pertaining to the family life of their parents, there by giving them the feeling that they care .Man is not satisfied with food and other material comforts alone. The parents, particularly educated and those who lead a decent life many not be much happy, just with the monetary support from their children, They expect    monetary support (, if they could not save enough for their silvery years), respect and care.  Parents and their children should live with common understanding and sharing of responsibilities, if not physical support.

In western countries, elderly people prefer to stay with other people of their age and having similar interests in places called ‘Old Age Homes’or more respectfully called as’ Senior Citizens’ Resorts’ or’ Retirement communities’  They don’t feel that they are deprived of their normal relationships. In the Indian context, where we had a legacy of joint family system, it is doubtful, whether seniors will enjoy living there even in a state of affluence. So if such a contingency arises, children in India should be extra- careful to conduct with them in such a way that such feelings are nullified by their more considerate behavior.

Paternal respect also implies respect towards life experience, out of which comes maturity and towards tradition bearing values ,eternal in nature .

Thus in short, the piety and sacredness of the situation should be kept rather making it a ritual. Gifts from children who  do not treat their parents with politeness, personal warmth, support and regard  have hardly any value , except it tends to be an act of exhibitionism  or at best a ritual  or an act of formality , In other words, it is not how costly and meticulously chosen  the gifts are  , we have chosen for our parents that really matters, but whether we show genuine concern towards  and attachment to them .Any act should be judged by the spirit behind it. 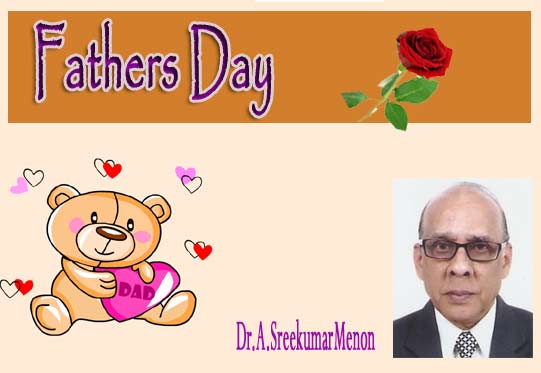