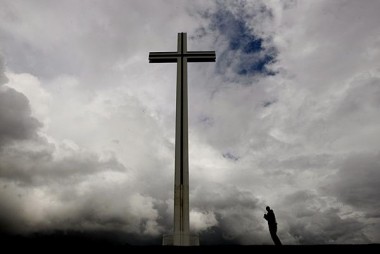 The sprawling  field hospital called the Catholic Church,  as described by Pope Francis, its Chief Physician, the mortally wounded in the family ward in India are victims  hit by the shrapnel called Endogamy which cuts in to scatter what God has united. Why do doctors  resist treating these victims, nay even refuse to take note of them in this year of the Family?

What is that deadly virus, the terminator first and foremost, that destroys Catholic families in India? All know it, all see it, the affected laity cry for help, but none in the hierarchy dares to open its mouth to name it in public due to the shame attached to it in this day and age. It is Endogamy, promoted in the Kottayam diocese by the triumvir in the Syro-Malabar Church (SMC) by their written approval and blessing.  Proof? Please read in subdued voice, lest others hear  and get scandalized, the instruction below in Mar Jacob Angadiath’s letter head:

Glory to God in the highest. Amen

I am glad to inform you that the membership in the personal parish/mission for Knanaya Catholics is settled through the discussion of the issue in the Synod of Syro Malabar Bishops and final agreement reached by His Beatitude Mar George Cardinal Alencharry, the Major Archbishop of the Syro Malabar Church, His Grace Mar Mathew Moolakatt, the Archbishop of Kottayam and Mar Jacob Angadiath, the Bishop of St.Thomas Syro Malabar Catholic Diocese of Chicago.

Please pray for our new Auxiliary Bishop-elect Mar Joy Alappat and for the blessing of his Episcopal ordination on September 27, 2014. Let us support and pray for our St. Thomas Syro Malabar Diocese of Chicago.

May the Lord bless you.

I leave you to judge the beatific and graceful content of the letter. If this is not equivalent to fence eating the crop what else is it? Wolves in sheep’s cloth devouring or scattering the flock? Who will guard the guards themselves (Qui custodiet ipsos custodes)? Aren’t the SMC bishops doing just the opposite of what Jesus bluntly and forcefully commanded: “What God has united, let no man separate?”

But according to SMC’s understanding, non-Knananites married to Knananites can unite freely in their bed rooms to make love and multiply but neither they nor their children have any right to be together in parish activities and worship. Is this the marriage bond Jesus envisioned  to promote? Is this what Pope Francis is trying to cultivate among Catholics with his two-year synod  study on Christian families?

During the last one year of world-wide survey to identify unchristian hurdles that beak up Catholic families, no bishop in India raised this painfully pestering sinister Indian problem for public discussion and resolution, although they cited some very minor peripheral issues like inter-religious marriages, national birth control norms that do not gel with Christian ethics, dowry  etc. But many right thinking lay people in Kottayam diocese itself highlighted this central sore issue, conducted seminars, sent several memorandums to bishops, even to Pope and made protest demonstrations against what is considered a callous, calculated silence to cover up the issue by SM Bishops and those belonging to Latin and Syro Malankara Churches for their connivance, complicity and silent approval of the deadly practice.

In fact right thinking sections among the Knananites in Kottayam diocese started highlighting the issue in an organized manner already in 2013 when they conducted a Seminar in the Syro Malabar Cathedral Hall in Chicago on August 3rd 2013. Reports of it were published in Kerala Express, Chicago, Indian Currents, Delhi, Almayasabdam, Kerala and in many other Christian and secular outlets. Visit: http://sites.google.com/site/jameskottoorspeaking/  to read the Keynote address: Endogamy and Knananites.

It brought no response either from SMC or from the CBCI bishops.  Then they sent memorandums and made a protest demonstration while the week long 31st CBCI meeting was held in Palai in February 2014 and sent another Memorandum to the Bishops.  The SM bishops were contacted again when they held their synod in Kakkanad in August 16-30, 2014, and drafted the letter cited above, all to no avail. The latest is the letter: From: Knananaya Catholic Navikarana Society (KCNS), sent: To: The Secretary of Synod to be held on Oct.15th 20015.  This also can be read in the above website.

All this lends weight to the saying:”There is something rotten in the State of Denmark.” The stink is suffocating, not only in the SM Church but in the whole church in India divided on three-fold Rite-lines (but wrong) and pulling in different directions. All know it and say, it is the worst curse of the Church in India. It prevents it from acting as one united body, as one family. Also it prevents any of the three Rites, all called Catholic, to utter anything uncomplimentary in public against any of the Rites, just to appear in public, they are all united in thought, word and deed. They are not. A house divided against itself cannot stand except for the pursuit of power, position and pelf, as do ever so many conflicting political parties. They support each other for survival and stop short of destroying each other by making comments causing displeasure or disapproval to fellow competitors in the musical chair for Episcopal thrones by any means.

The question is, whether this rotten, stinking issue in the Indian Church will again be swept under the carpet even during this second year focused on family, to prevent it from hogging the lime light and cause  utter shame and ridicule  for themselves in front of civilized world.  Like the ostrich burying its head in the sand how long can they go on pretending they haven’t seen it, while it is clear like day light to people at home and abroad?  “Hypocrisy” what else is your name for pretending not to see and admit a self-evident wrong and refusing to say “Mea Culpa”, sorry, and take corrective steps?

The concluding  second session of  the two year mammoth study  launched by Pope Francis on the Family of man is due to begin in Rome,  coming October, in another five months.

The extraordinary Synod which concluded last October stood out for its transparency and open discussion  without mincing words -- vertical targeting even papal statements and horizontal between bishops on all accepted and controversial issues affecting family life starting from the ideal union of love in the service of life,  to broken families, divorced and remarried, one-parent families, cohabitation  and  lesbian unions.

The standing instruction from that Synod was that Bishops all over the world should duplicate similar discussions and dialogues in their respective dioceses with their priests, religious and faithful at specially convened forums to search and find out problems peculiar to their region, culture and local customs to promote what is good and correct what is harmful to family well being.

Has anything happened in this area in India in the last six months?  None to my knowledge. So is it going to be a repeat like last year of not doing anything to study ground realities?  Already in 2013 Pope had sent a set of 39 questions to be distributed and answered by the faithful for study at the Extraordinary Synod in October 2014, but  not done in India. To remedy that shameful failure on the part of the hierarchy, some lay initiative led by Sri Chottebhai did their best to conduct an ad hoc survey and consultation last year in Pune with the support of Catholic Church Reform International (CCRInt’l). Due to their limitations, survey was limited to one diocese and the much publicized meet reportedly was attended by some 30 people only.

What remains to be done is to get the whole church, both pastors and faithful around the world to discuss and study the Lineamenta (the final basic preparatory draft) sent from Rome for study, and to be reported back to the Synod with suggestions. This in turn will  be taken up at the coming Ordinary Synod for final discussion, modification and approval. We do not know at what stage it is in India. The latest news is,  that at least  the CCRI has been doing a non-stop in depth study of this Lineamenta, in the light of  the  data  it collected from a global network of 100+ reform groups in some  60 countries

The result is a thought provoking  30 page suggestions and recommendations titled: “Response of Catholic Church Reform International to Questions Aimed at a Response to and an In-Depth Examination of the Relatio Synodi” for the Synod Fathers.  It is wroth reading and meditating by all, especially by the Hierarchical Church in India which has done pretty little in this regard, as it happened last year. This CCRI response is already dispatched to Rome and is    available for study at: www.CatholicChurchReformIntl.org.

Commenting on it writes one: “This is a very, very good document. The people who put it together need our heartiest congratulations and support. I hold my hands up in frustration though wondering how many people will even wade through the very discerning and carefully framed arguments they have put together. Partly the problem is simply time: people don't have the time in their lives. They want — even need and crave — simple, one, two or three line answers. There are so many questions about life that simply cannot be answered in one, two or three lines..... How many progressively-oriented people might read it and, even more so, how many bishops might read any of it?”

The writers therefore urge Catholics who believe that Church teachings do have to be interpreted in new ways need to “seek dialogue with those in the Church who are opposed to change. I think it is literally impossible. You cannot dialogue with these people. Even the Son of God himself couldn't dialogue with the equivalent elements in his own time who believed they alone were the arbiters and interpreters of "the mind of God" — they bloody well crucified him.”

At one point the CCRI’s response states: Opposition to any change and “Conversion most needed is on the part of the hierarchical church.” Does it not apply doubly or trebly (we in India stand on the tripod of three Rites, each tolerating the other two) to bishops in India who did practically nothing last year and are not seen doing anything special this year either, as of now?

The moot question therefore, is whether the SMC which produced and cultivates the Endogamy  virus (some label it as “Racism” of Pure blood promotion), will ever dare to discuss the issue publicly and take drastic steps to stop the rot forthwith, instead of being  seen as   destroyers of  Christ-willed Unity in Knanaya Christian families where Endogamy is cultivated and allowed to spread  both in India and abroad?

If this can’t be done the least the Triumvir who produced the beatific Letter, cited above,  to bless and promote the practice should do is to boldly imitate the  glorious example of Pope Benedict XVI who quit, instead of sitting tight on his throne like dead road block – emasculated morally and blind spiritually -- in the WAY of the Lord, in order to usher in a fertile, clear sighted and courageous Pope Francis. There should be no dearth of such prelates in SMC. What is important is to make straight the WAY of the Lord into the heart of every Christian home.